Anti-aging promises in cosmetics, marketing concepts specifically for people 50+, or the consequences of the boomer retirement wave: aging is omnipresent in society. This process, while much less obvious, is also constantly present in our cells. Aging and age-related diseases bring about major challenges on various levels, making the aging of cells an important scientific research focus. At this point, we invite you to join us on a research journey. Our destination: new ways to understand the process of cellular aging and to meet the challenge of age-related diseases.

Aging is a process that accompanies all biological organisms from their formation to their end. The exact mechanisms of this process have not yet been resolved. Many different scientific hypotheses exist to explain this phenomenon. Therefore, aging still has a somewhat enigmatic character. Meanwhile, the process is expanding as people get older, on both an individual as well as a societal level. Aging changes our society in different ways and entails challenges for medical care. Diseases such as Alzheimer’s, cardiovascular diseases, high blood pressure and cancer are becoming more common. The same applies to chronic wounds, which occur more frequently in older people. Therefore, new approaches in medicine are needed to treat an increasingly aging population. This is one of the reasons why SHoW, the Ludwig Boltzmann Research Group for Senescence and Healing of Wounds, was founded.

SHoW´s biomedical research platform led by Dr. Mikolaj Ogrodnik works on developing new therapies. To do so, it is first necessary to understand the fundamental processes of aging. This research path leads into the smallest structural and functional unit of an organism, the cell. Join us now on a journey into the fascinating and complex world of cells. What to expect? Microscopically precise insights into the aging process and, at the same time, unexpected connections to the processes involved in the development and regeneration of organisms. We would also like to introduce you to the “scientific Rosetta stone”. This concept was recently described by Dr. Mikolaj Ogrodnik, Dr. Nadja Ring and Karla Valdivieso, MSc of the biomedical research team of SHoW. Published in the journal Developmental Cell, it provides insights into the processes of healing and regeneration and may yet contribute to deciphering the enigma of aging. Are you ready for this journey? Then follow us, there is a lot for you to discover! 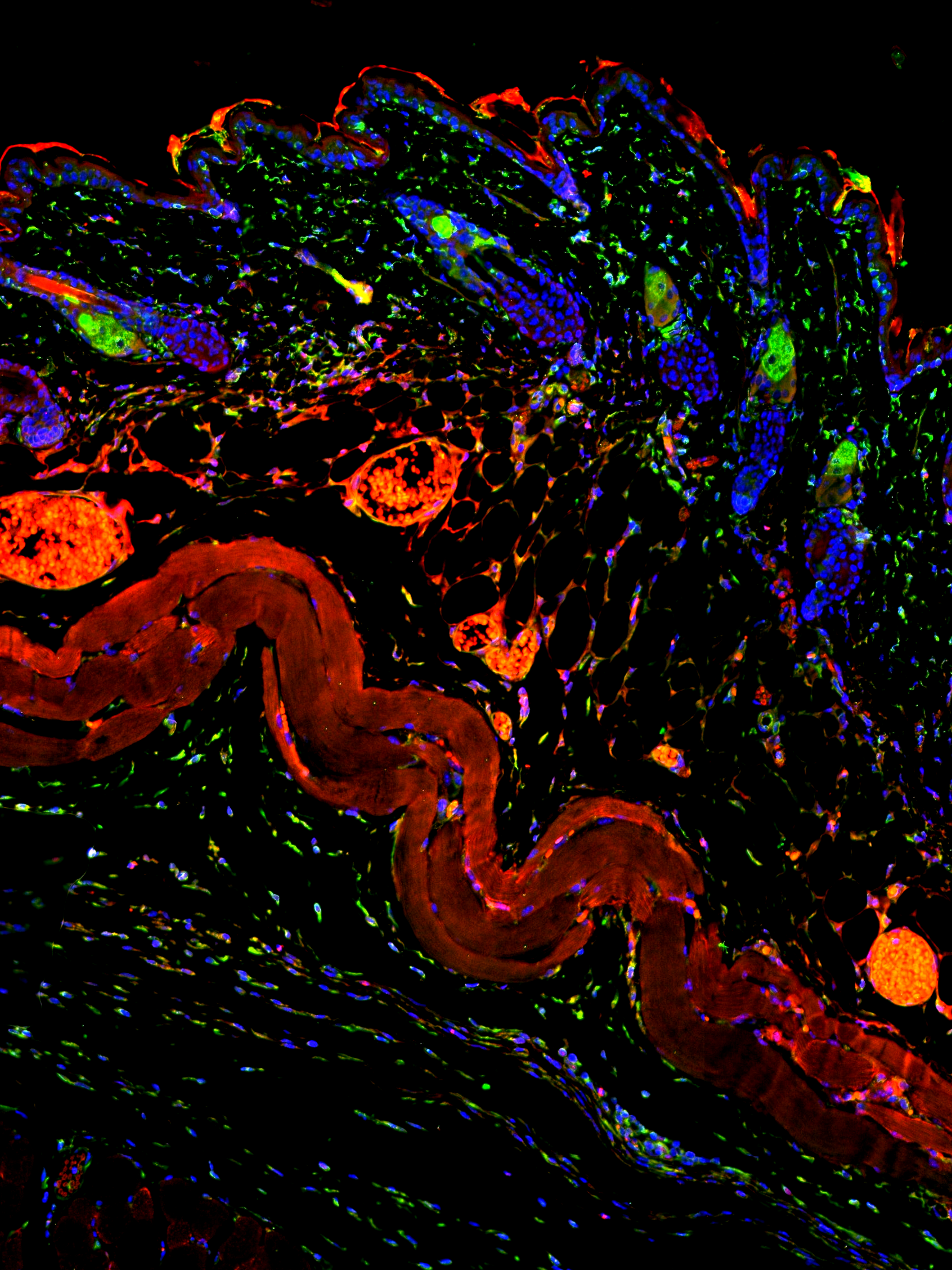 a.
a. Many research projects currently focus on senescent cells. New insights into senescence might enable scientists to alleviate age-related diseases. (Photo by Karla Valdivieso)

What seems to be contradictory, yet works together

The aging of organisms is strongly associated with the process of cellular senescence. In senescent cells, the cell cycle is at a stand-still, which means that they can no longer divide to produce more cells. In addition, senescent cells produce factors that promote inflammation. This is a beneficial mechanism, used by organisms to alert the immune system and get rid of bacteria and viruses. However, if inflammatory stimuli are continuously present, as is the case during aging, they become problematic.

For the development and regeneration of organisms, a certain ability is crucial that brings about a fundamental change within the cell: cellular plasticity. It refers to the ability of cells to change their identity – to “differentiate” or “dedifferentiate” – meaning they become more or less specialized. If a cell differentiates, it can take on special functions. Dedifferentiation, on the other hand, proceeds in the opposite direction, the cell loses its specialization. Dedifferentiation is often associated with tumor cells. At first glance, senescence and cellular plasticity appear to be opposites: on the one hand, a stand-still is induced, on the other hand, an active change occurs. Only a closer look reveals a connection between these phenomena. Specific signals that trigger senescence in cells are the same triggers that can cause cells to differentiate. A senescent cell itself can no longer dedifferentiate, while senescent cells can trigger this loss of specialization in surrounding cells. The different roles that senescent cells assume may seem paradoxical. However, this very paradox points to the different outcomes that cellular senescence can lead to and how it interacts with cell plasticity.

Currently, the role of cellular senescence as the main cause of the process of aging is still discussed within the scientific community. However, the results of many experiments suggest that cellular senescence drives the symptoms and progression of age-related diseases. Remember, that we explained above that cellular senescence is also important in development and regeneration. They interact with a now well-known phenomenon, cell plasticity. The change of identity that cell plasticity enables is essential for cells to proliferate, to migrate and to take on new functions. Senescent cells, in turn, can support these processes, as previously noted, because they promote the plasticity of surrounding cells.

Let´s illustrate this with an example: During the development of human fingers, senescent cells show up at the tip of the digits and see to it that cells building the fingers do so in a coordinated manner. Senescent cells make them stay dedifferentiated as long as this is necessary and let them differentiate when the digit is ready. Thus, the fact that us humans have functional fingers is partially thanks to cellular senescence impacting on cell plasticity during development. However, unlike development and regeneration, where senescent cells are removed after they have fulfilled their function, during aging, senescent cells remain in the tissue. This is problematic and leads to negative consequences for an organism, such as age-related diseases.

The conclusion from this ultimately leads to the destination of our research journey into the interior of cells: by understanding the interaction of senescence and cellular plasticity which takes place in development and regeneration, we can gain new insights into the process of aging and into age-related diseases. New insights into why and how senescent cells affect surrounding cells during regeneration and development can result in new medical interventions, specifically targeting and eliminating senescent cells. This may lead to a better understanding of aging, and eventually to important progress in the alleviation of the course and symptoms of age-related diseases.

And now the reward for your thirst for knowledge. You have really earned it: the ceremonial unveiling of the “scientific Rosetta stone”. The historical Rosetta stone was inscribed with a single story written in three different languages, two of which were well known to historians. By translating the Dionic and ancient Greek inscriptions, this allowed historians to decipher the third language:  Egyptian hieroglyphs. Similarly, SHoW´s biomedical research team sought to decipher the interplay of senescent cells and cellular plasticity in aging and age-related diseases by analyzing the same interplay in the processes of development and regeneration of organisms. As with the languages on the Rosetta stone, the story of senescence and cellular plasticity in the two “languages” of development and regeneration can be crucial to understanding the process of aging.

The “scientific Rosetta” stone as described by Dr. Mikolaj Ogrodnik and his colleagues represents an innovative framework for further research into cellular senescence and its role in aging and age-related diseases.

Save selection Accept all